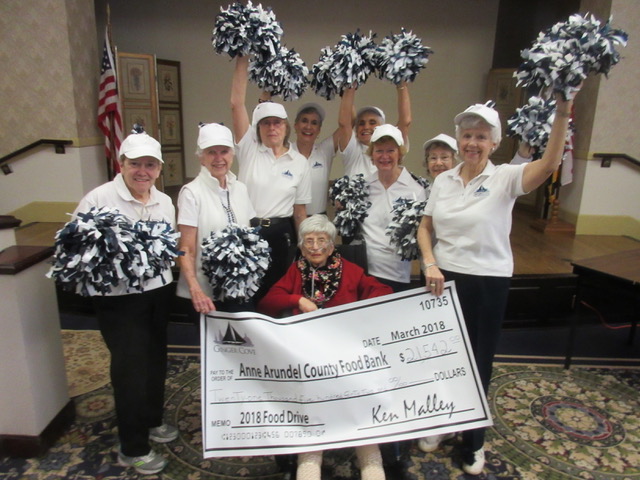 Ginger Cove today announced that its residents will donate a record $21,542 in cash contributions and an additional 546 pounds of food to the Anne Arundel County Food Bank, the equivalent of 160,000 pounds of food to feed almost 3,000 people.

The cash contribution included a $10,000 anonymous gift from a resident to support the annual campaign, which was chaired once again by resident Shirley Lieberman under the auspices of Ginger Cove’s Religious Life Committee. It is the third consecutive year that Ginger Cove residents have supported the food bank, with increasing participation from staff and residents each year.

“This year’s successful Food Drive is a great example of Ginger Cove’s involvement in the community,” said William M. Holman, Chief Executive Officer.  “Our residents and staff are making a difference to help improve the lives of those less fortunate,” he added.

“At first, it was a challenge to learn to hit the croquet ball properly. Then I realized it was an intellectual challenge. I now have good friends throughout the area who play and are able to play in tournaments.”