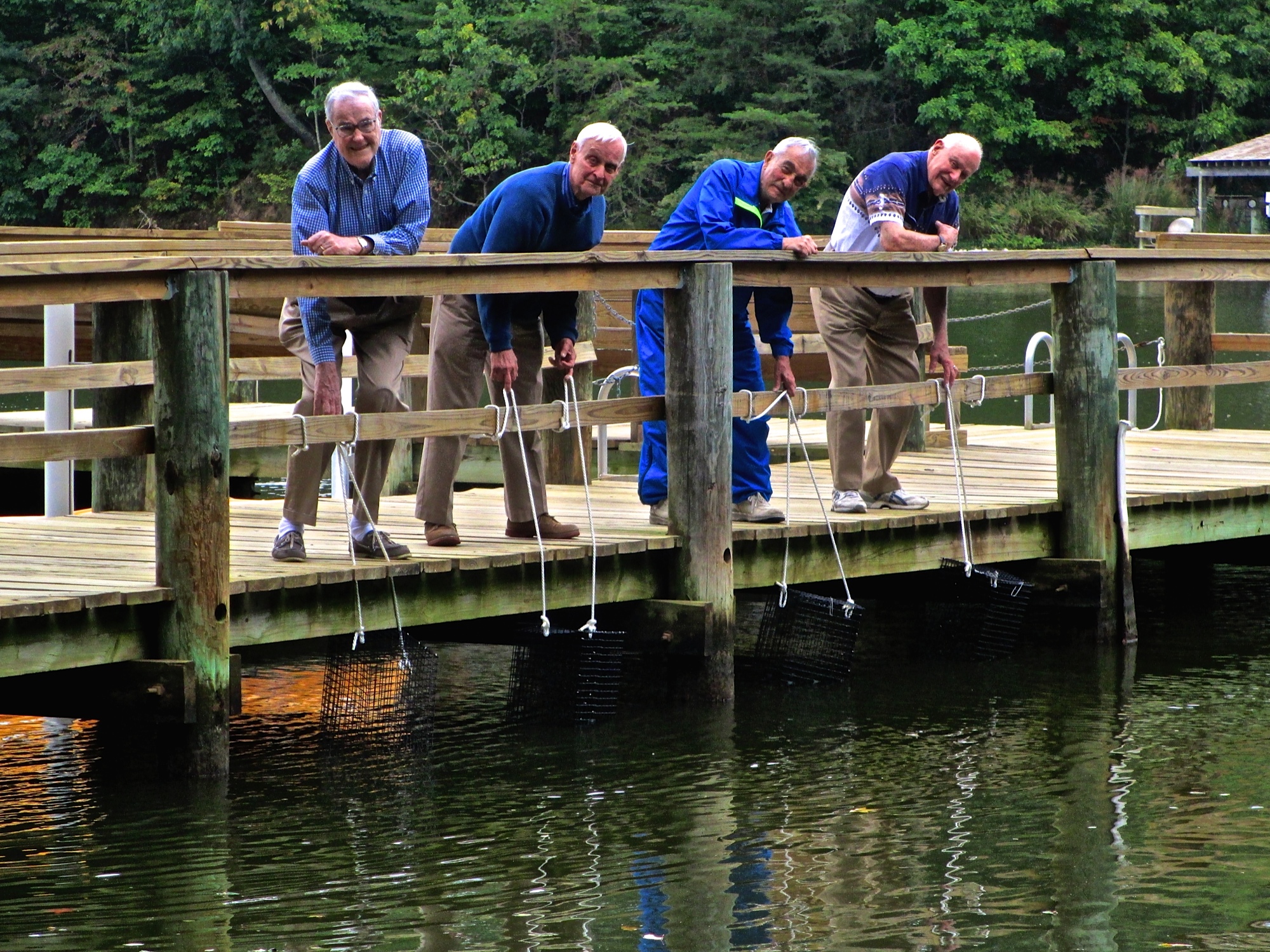 Five residents of the Ginger Cove retirement community in Annapolis are participating in the Oyster Restoration Project operated by the Department of Natural Resources and the Chesapeake Bay Foundation.

Meade Rudasill, Gene Avallone, Dwight Barlett, and Bill Clark have joined John Kenny, who has been running the oyster gardening program at Ginger Cove for 14 years.

Kenny describes the program this way: “We coordinate with the Chesapeake Bay Foundation, and they tell me when the spat (baby oysters) are ready. We put them in cages—about 2,000 at a time. The cages are then hung over the side of a dock, and every 2-3 weeks we run a hose to the dock and wash them with fresh water. Mud accumulates and sometimes we clean the cages with wire brushes to get the sediment off because you want good water flow—this helps them breathe better. Then they sleep for a couple of months through the winter. In the spring, when the oysters are adolescents, they are brought to a protective reef so that no one can fish for them.”

Rudasill described what happens next: “The oysters stay there at the reef and grow into edible oysters. They say farmed oysters take about three years from spat to market ready, but these take maybe 4 – 5 years. In September we get a fresh batch and start the cycle all over.”

Chris Judy, Program Manager/Chesapeake Shellfish of the Department of Natural Resources pointed out that “while we have many growers who are retired, Ginger Cove is the only retirement community working to enhance oysters as a group through the Marylanders Grow Oysters program. The goal of Marylanders Grow Oysters is to engage waterfront residents as oyster stewards, who grow oysters at their piers in order to enhance local oyster populations. Marylanders Grow Oysters only works due to the commitment and leadership of Bay residents in their neighborhoods. DNR sets the stage, but the people make it happen. The Ginger Cove community is an enthusiastic and dedicated group of oyster growers — a team we greatly appreciate and enjoy working with.”

At age 92, Kenny remains committed to the oyster gardening project: “We’re getting a bit old, but we do it anyway,” says Kenny, who stills gets up and down the steps to the docks. “I am amazed at what oysters can do. If you take a bucket of dirty water and add oysters, in about an hour and a half, the water will be clear. I don’t eat them anymore. I tell people we talk to them and pet them.”

Says Joan Williams, Director of Marketing at Ginger Cove, “Ginger Cove supports cleaning up the bay, and we’re proud that the oyster gardening program is one of our longest-running community projects.”