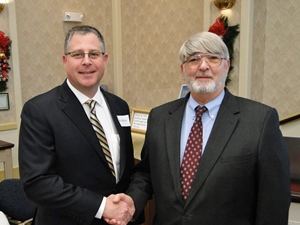 “Bill’s experience and track record of success in senior housing is a perfect fit with Ginger Cove’s strategic plan and our resident culture,” said Edward R. McDevitt, M.D., President of its Board of Directors.  “His accomplishments bring great value to the table for the benefit of our residents.”

The appointment was made following an extensive national search process, with more than 100 individuals expressing interest.  The search process was facilitated by the Deffet Group of Ostrander, Ohio.

Mr. Holman has served as President and CEO of Sagepoint Senior Living Services, Inc. in La Plata, MD since 2011. During his tenure, Sagepoint opened a small-house memory care unit, expanded an “in-home” care agency, planned for construction of a 60-apartment assisted living building, and achieved a five-star Medicare rating. Prior to that, he was Sage Point’s Vice President and Chief Financial Officer.

Mr. Holman has completed several doctoral-level classes at University of Maryland, Baltimore County, where he earned a M.A. (Management of Aging Services) and is an  Adjunct Professor at the Erickson School of Aging Services.  In addition, he holds B.S. degrees from Frostburg University (Finance) and Towson State University (Accounting).  He is married with two children.

“I was active in the Charlottesville, VA art community. I volunteered for the Watercolor and Fine Arts Committee and had a successful exhibit there and then I took over the gallery. It was an activity I know how to do and the gallery has become so popular here, local artists are always asking to be shown here.”